Editing the space between pairs of glyphs

⚠️ First, MAKE SURE TO SPENT MOST EFFORTS ON SPACING to avoid having to create too many kerning pairs.

Once you've properly spaced your characters, it's time to optimize the spacing around specific pairs of characters. Click on the buttons Advanced and Kerning. 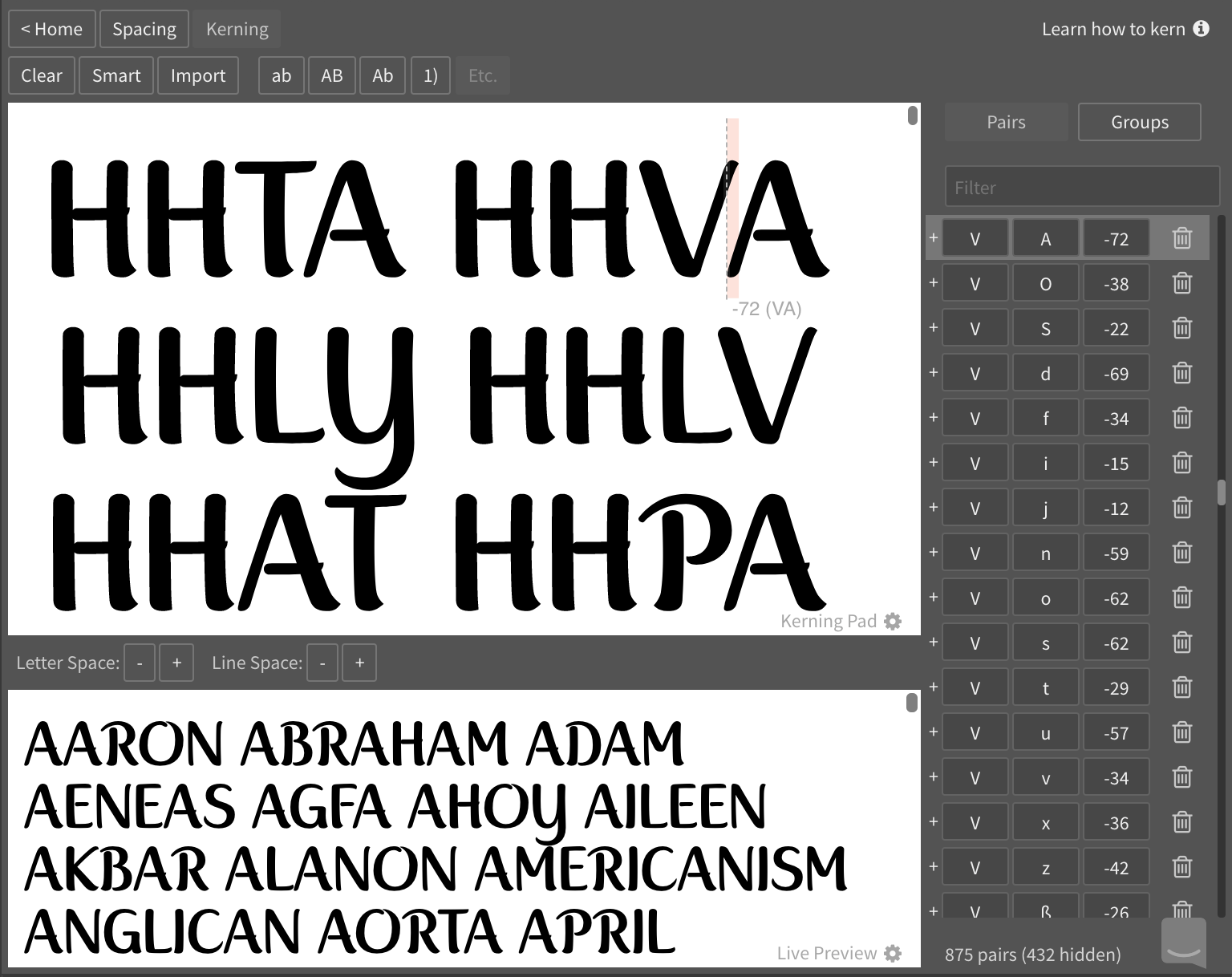 Since version 3.5, Fontself Maker lets you kern your entire font in one click with the Smart Kerning. Here is what you get when you click on Smart in the tool bar: 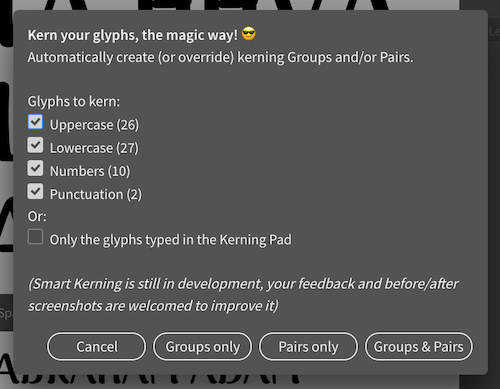 Depending on what you need, Fontself Maker lets you automatically:

You can run Smart Kerning on your entire font, or if you want, only a glyph subset (Uppercase, Lowercase,...) or even just on the glyphs you typed in the Kerning Pad.

As some pairs of letters remain inharmonious as you space your glyphs, you must manually fix each pair. One approach to solve this task is to look at a common kerning pairs along with a couple other glyphs that serve a control characters to define the rhythm you want to match: like nnav for lowercase, HHAV  for uppercase.

To create and modify kerning pairs, you can interactively move glyphs (the quick way) or edit table values (the precise way).

First, search for visual misplacements in the left side preview text.

Once you've found a specific pair of letters that requires custom spacing, type some text in the Kerning Pad to display the kerning pairs you want to adjust visually (you can also copy/paste specific words from the bottom left preview).

Then click on the second glyph of the pair that needs adjustment and modifiy their relative spacing (the kerning value):

This will automatically create or edit the kerning pair and update it to the bottom right kerning table.

To enter specific kerning values or create a new kerning pair without having to manually interact with a glyph, simply enter the exact characters and values in the kerning table.

All changes will automatically be updated in all previews.

Just remember to save these changes by reexporting your font (note that it's always worth keeping backup files of different font file versions).

Quick tip: need to edit a specific kerning pair? Don't scroll the table to find it: just enter the first character in the Filter text field at the bottom right.

To adjust the values of any specific alternate, you can either click on a glyph in the Kerning Pad and pick a variant for a visual adjustment, or just enter any character in the Kerning table and pick from the alternates list.

For alternates that feature similar shapes (like color variants), it is recommended to leverage kerning groups so all the alternates' kerning values are automatically set to match their parent's glyph. 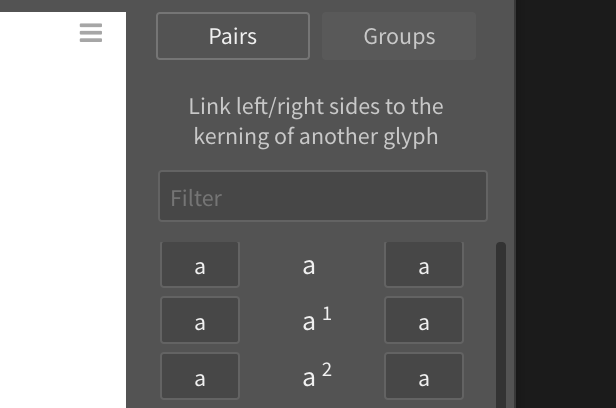 You can now bring all the kerning pairs & groups from another font file into your current typeface. More details in this article.

Kerning pairs are missing or not showing up

Due to a bug in Chromium (which runs extensions on Adobe's apps), kerning applied to alternate glyphs will not show up in the main preview. In the Advanced views, the kerning will however show up ok as we developed our own text rendering engine for this part of the UI, and the kerning will also be ok when used in other apps.

Next step: work at light-speed with Kerning Groups

Once you're ready to optimize the space around your characters, click the button Groups to step further into Kerning Groups.

Special thanks to Robert Bell for allowing us to showcase his Chromage bold font in the sample screenshots.