Extending the character set of your fonts

With Fontself you can associate any shape to any Unicode character:

Whether you want to make custom bullet points or an alien language, you're covered.

NOTE: while Fontself supports any Unicode character, it is optimized for Latin & Cyrillic, but not yet for non-Latin alphabets or left-to-right scripts (like modern Greek, Arabic, Hebrew, Thai, etc.) We hope to support these scripts in future updates.

When you don't know how to type a character that you'd like to create, use a tool like unicodelookup.com, Apple's Character Viewer (which does unfortunately not work from Adobe's apps), Windows' Character Map or any other (like UniCodeChecker) to search for characters by their name.

a) Use the Create Glyph button

You can alternatively simply drag & drop your shape into Fontself and rename it by editing the text box below your glyph: 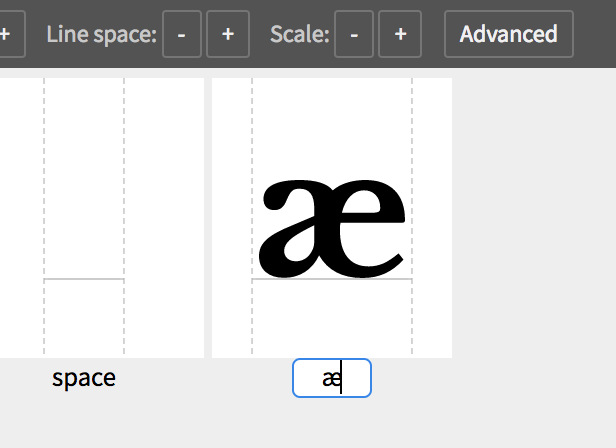 There are 3 different ways to quickly create new glyphs:

1. Drag many shapes all at once

You can import & automatically assign the name of many glyphs on one click. Just select them and enter the same amount of characters, separated by a comma, like: A,a,B,b  or $,€,¥ ‎ or Б,Д,Ж,И  or " “ ” or more sophisticated ffi.liga, f.alt2  to create ligatures and alternates):

In Fontself v2.0 you can rely on the Smart Batch feature to automatically assign a character to each object you import. Simply rename each object in the Layers panel with the exact character key you want. Then import them, and boom, you're done! 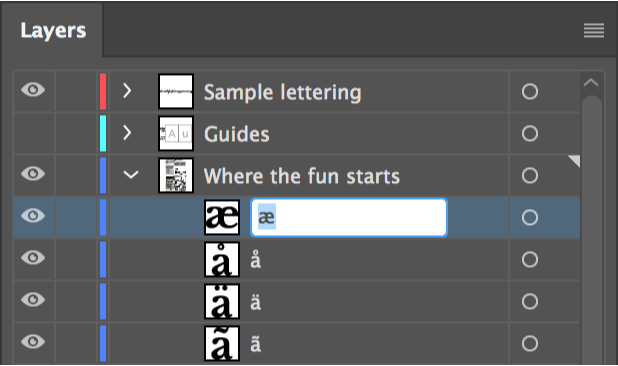 Making characters from a Unicode value

To create a specific character, you can either enter its actual character - like ✔︎ - or its Unicode value with the prefix U+ - like U+FE0E

The Space character is the only one of these specific characters that is visible in the glyphs list and it has editable metrics, while all others are hidden and cannot be edited.

You can replace the ❝cruel emptiness❞ of the space glyph with your own custom shape by typing a space key   or naming the related object U+0020 in your Layers panel.

⚠️ This feature works fine in many apps and browsers but could not run properly in various apps.

🐛 Also, Illustrator CC currently has a bug that prevents custom space glyphs to be rendered as expected when they are used within an OpenType-SVG color font. So please join us to ask Adobe to fix this bug (you can upvote in just 1 click :)

When you drop arbitrary shapes on the Fontself panel, they are automatically assigned with a unique character key that you can later change (they look like empty squares over an orange background). This ensures that you can access to any glyph you made from the Glyphs panel, as these characters are actually individual Unicodes from the Private Use Areas (PUA).